An android game I’ve been really enjoying lately is move from Nitako Brain Studios. It is a game with simple mechanics and extremely good puzzle design.

Their trailer shows off pretty much everything you need to know about it. If you don’t access to youtube then I’ll do my best to explain.

A board consists of an n by n square featuring n colored dots, n shaded squares whose colors match the dots and any number of blocking obstacles. Each move, you select one cardinal direction and swipe the screen in that direction. All dots move one square in that direction unless they are blocked by a wall, an obstacle, or another blocked dot.

Here is the initial state of the board 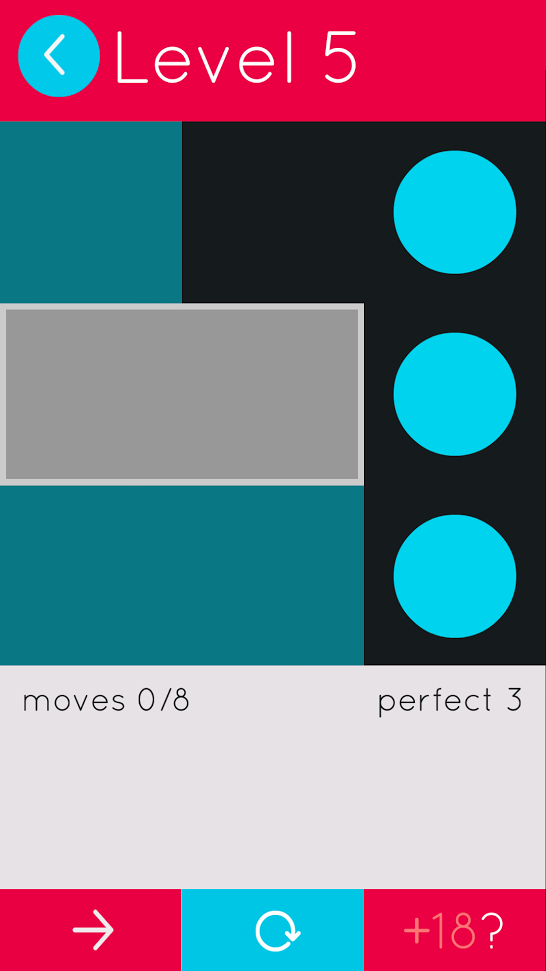 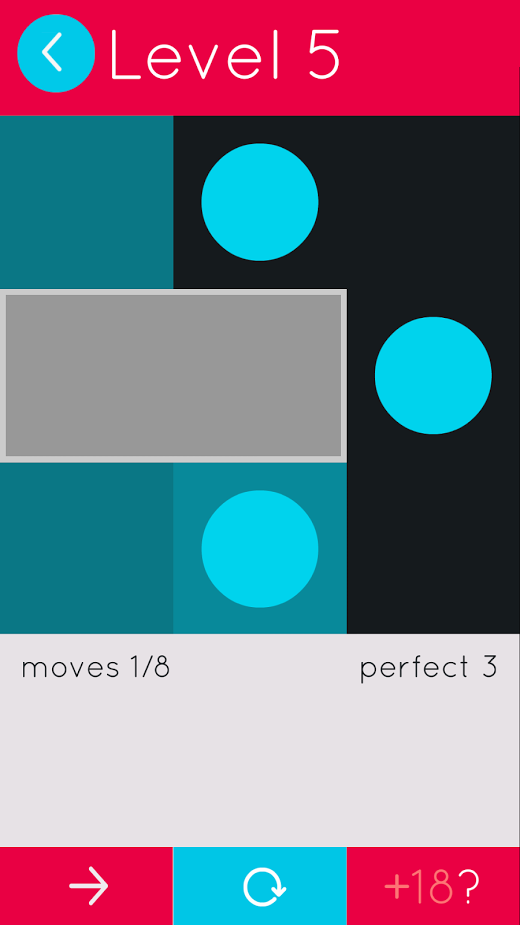 Next we swipe down moving the rightmost dot down 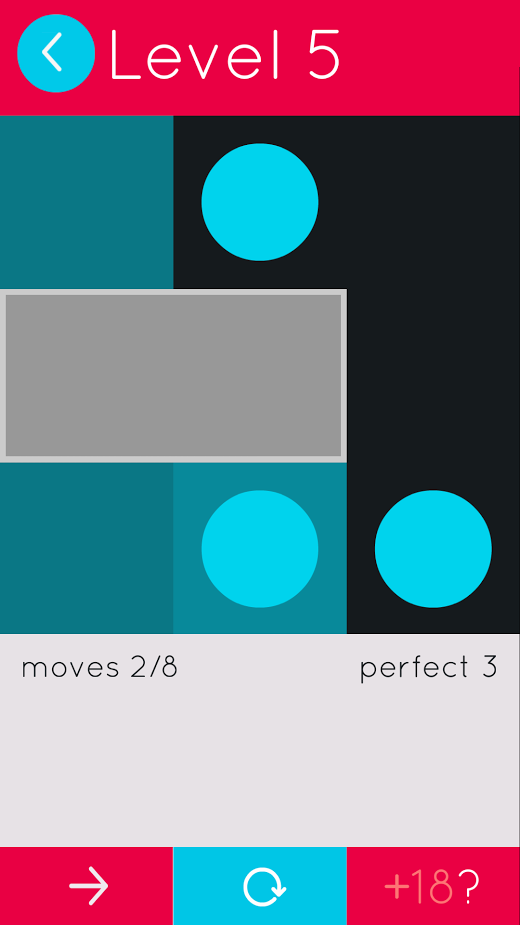 Finally we swipe left to align all dots with shaded square 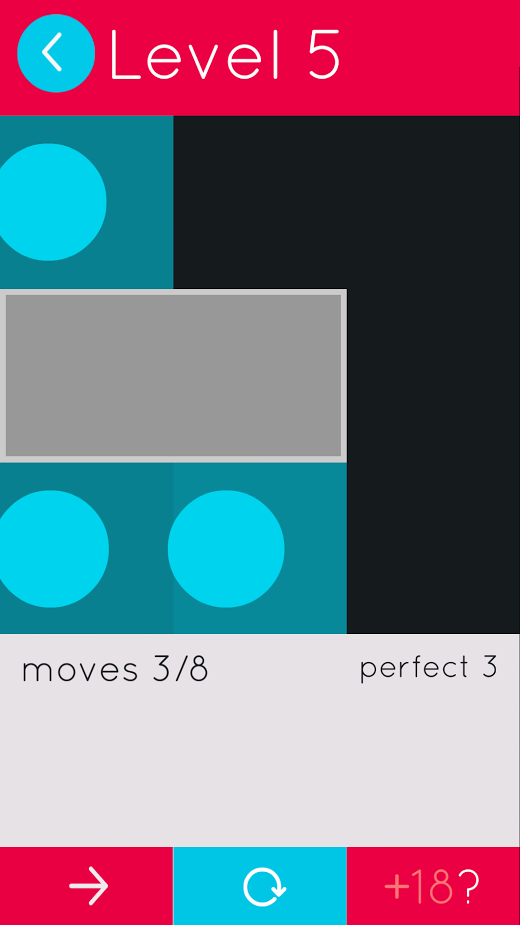 For each board, the game tells you how many moves are in the optimal solution.

A Puzzle I Couldn’t Solve 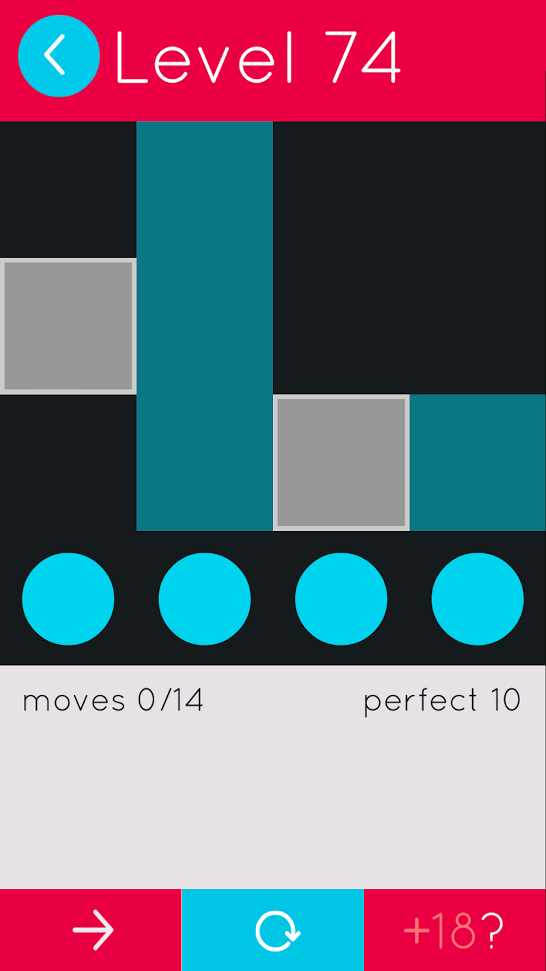 I had solved 99/100 of the 4x4, 1 color puzzles with the shortest possible solution but struggled on puzzle number 74. My shortest solution, URURDRURLLDU was two moves too long.

Trying to Brute Force on Paper

Solving the game in code

I decided to write some python to settle whether or not this puzzle could be completed in ten moves. My implementation has two parts.

I reused the python class with only minor modifications across my version of the solver. The class treated a board state as a 2D array of ints where 0’s represented empty space, -1’s represented unmoving blockers and 1’s represented dots. For puzzles featuring more than one color, number other than 1 can be used to specify the color of a dot/goal position. It had a function to do the action of swiping in each direction and not much else.

###V1 My first version of the program optimized for programmer time not runtime. There are at most 4^10 (roughly one million) possible move sequences. It isn’t that expensive to compute one move on the board. Lets just simulate each of the one million sequences and print the first successful solution we find.

The two interesting pieces of code were as follows.

The board class exposed a function that took an integer, treated it as a sequence of moves, and executed that sequence on its internal board.

The main function then called the move_sequence function on every integer in the valid range and then compared the result against the desired final board.

###V2 This version of the program attempted to leverage the fact that early subsequences were being executed many times by using memoization. I also decided to return a list of solutions in case there were multiple.

I made a minor change to my board class here to make the move_* functions return false if they failed to change the board state (not shown).

The above function then depth first explores a tree where every node holds the state of the board after the sequence of steps leading to it. The change to the board class made it easy to ignore fruitless subsequences. Whenever I encountered a move that didn’t change the board state, I stopped exploring that branch of the tree (line 13).

###V3 This version switched from depth first search to breadth first search. It is built on the idea that most states are reachable in many ways and we shouldn’t have to keep paying to do the same computations on those states.

It maintains dict of all visited states and the shortest known path to them. Whenever a state is computed, the algorithm checks if it is new and ignores if it is not. In the case of the board in question, only ~500 states were reachable in any number of moves.

It turns out there were two solutions.

It is clear to me now that a state centric approach with caching of intermediate results is the correct method. V1 computed as many as 4 million transitions between states. V3 only did work on each state once so it computed at most ~2000 transitions.

Where We Went Wrong on Paper