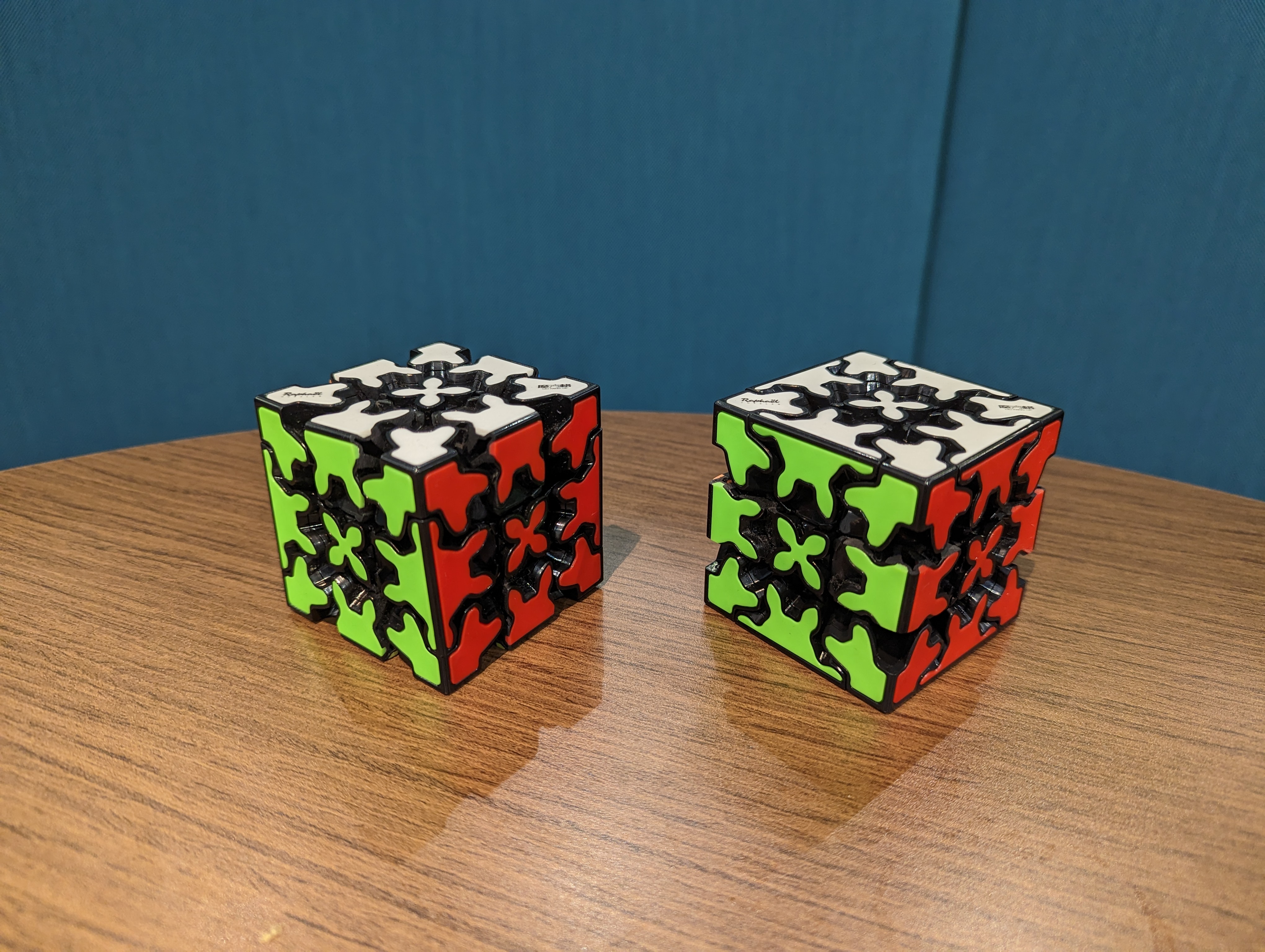 There’s a variation on the standard 3x3x3 Rubik’s puzzle called the Gear Cube. It has the same centers, corners, and edges as a regular Rubik’s cube, but it turns differently. When you make a 180 degree turn on a face, the slice layer below it turns by 90 degrees. You cannot make 90 degree turns on faces because then the middle slice would be turned 45 degrees and would block subsequent moves.

Oskar van Deventer designed several variations on the Gear Cube which increase the challenge. One was mass produced under the name Gear Cube Extreme. This puzzle replaces four of the geared edges with conventional Rubik’s cube edges, arranged along one of the middle slices of the cube. When you turn a face, its behavior depends on on the middle slice next to it. If that middle slice is composed of gear edges then the turn is like a Gear Cube. If that middle slice is composed of traditional Rubik’s Cube edges than the turn is like a Rubik’s Cube. The non-geared edges can never leave their middle layer so the solver never has to react to which turns are geared turns vs normal turns.

Another variation that Oskar designed was Even Less Gears. This puzzle replaced 8 geared edges with conventional edges. Like the Gear Cube Extreme, if there are any gears in the middle layer, turns will engage those gears. Unlike the Gear Cube Extreme, the gears can move around relative to one another. This means the solver’s strategy needs to account for the positions of the gears when executing sequences.

I saw a reddit post where someone had modded a different style of Gear Cube so it worked like a Gear Cube Extreme. It seemed relatively straightforward so I decided to copy them, but make an Even Less Gears instead.

I used a dremel with a sanding band to remove most of the material, then hand sanded it to get a smoother finish. My initial attempt didn’t remove quite enough material which resulted in bumpy turning but I did a second round of sanding and was able to get the turning to be extremely smooth.

Playing with my modified puzzle got me wondering if there are other gear cube variations that can be made from a mix of geared and un-geared edges. I realized that if I made a copy of the gear cube extreme, I could mix and match edges between the two puzzles to make all Gear/Rubik’s cube hybrids. But what hybrids exist?

As is often the case, I’m not the first one with this idea. Andreas Nortmann enumatered seven variations.

“There are no more than 7 different variants. These are:

All other variants are identical in behaviour to one of these.”

Another user on the forums actually built all of these.

Oskar’s original Gear Cube Extreme had some unstickered parts. Some people chose to add stickers to those parts and named the results the “Gear Cube Ultimate”. These stickers represent the orientation of a Rubik’s cube edge piece, independent of the orientation of the gear, and add an additional challenge.

The puzzle I’m modifying does not have these parts but I think I can partially simulate them. For example, I believe I can replace one geared edge on the Gear Cube Extreme, which will act like the Ultimate stickers without affecting the behavior of the puzzle. I need to think more about whether the other hybrids can be modified in the same way. 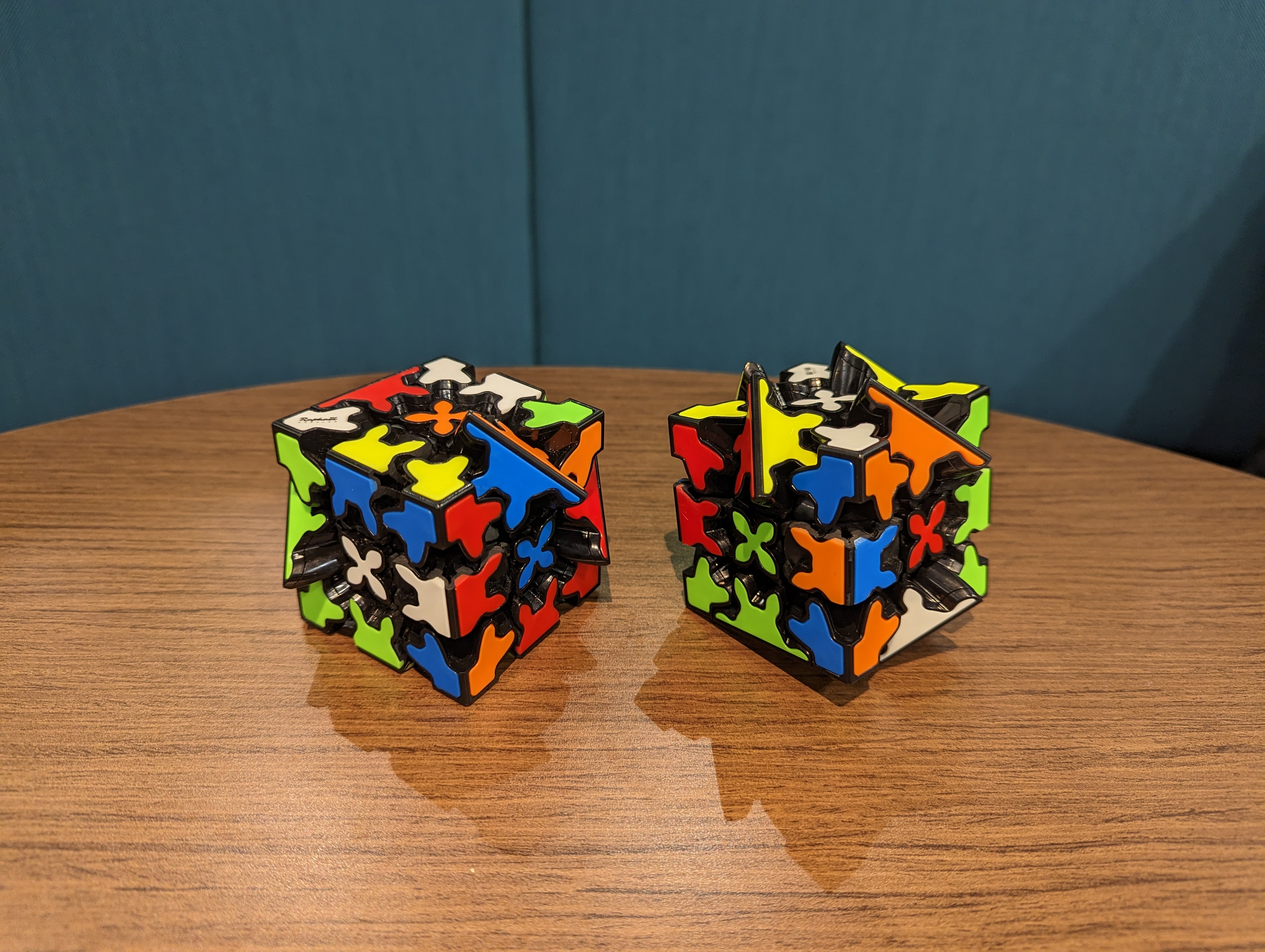